Don’t fall foul of the law when using social media 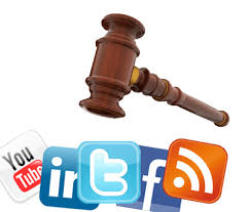 Not a day passes without some headline ironically on social media of yet another person falling foul of the law and being spoken to because of their conduct on Facebook or Twitter.

Social media has become such an integral part of our modern lives that we share so much without perhaps taking a step back and thinking about the legal implications.

With social media growing so fast this is something that impacts on us all.

Social media use in the UK and Ireland has changed dramatically over the last year, but as some things change, others stay the same as the dominance of Facebook continues. LinkedIn has had a great 2016 and has grown to a universe of 16m users. Including, according to LinkedIn, 66 rocket scientists and 744 magicians!

As for Twitter, the latest statistics are that 25% of all UK and Ireland  internet users are now using this medium, which are 9.5m people.

2016 is the year that will be remembered in social media as the period when the new kid on the block Instagram, overtook Twitter in terms of global audience. This fast growing medium now has over 300 million users worldwide enabling its users to take pictures and videos, and share them on a variety of social networking platforms, such as Facebook, Twitter and Flickr.

With this growth are you or your business now in danger of unintentionally breaking the law when using social media?

I would urge you all to make sure you are fully aware of the legalities of using social media personally and for business. In fact, everyone who uses any social medium would be well advised to follow these five golden rules:

People follow others on social media for a number of reasons and one of those is knowledge. It can easily happen that confidential information could be disclosed on Twitter or Facebook as someone either wants to gain followers or impress others. A sensible protection for any business would be to have set policies and procedures that ensure employees are aware of their ongoing obligations not to disclose confidential or proprietary information.

There is a term called ‘fair use’, where it is permissible to refer to a company, its product or a service in your blog, Facebook posting or tweet. However, an increasing number of individuals and organisations are falling foul of trademark infringement where guidelines state it is not permissible to use the trademarks of others to create a false impression of endorsement, affiliation or sponsorship.

The best practice is to seek permission before using material that appears to be a copyright-protected work. In some cases, the content owner may charge a license fee, but that fee will certainly be less costly than defending an infringement lawsuit.

A great attraction of social media is the ability for real time dialogue and the opportunity to post on issues as they unfold. This immediacy is a major risk as comments and observations can be made without thinking through the consequences or in the heat of the moment when emotions are running high.

A good habit to adopt; is to stop, think and read every post over again before you press send.

Also ask yourself, would you feel comfortable saying this face to face? If not don’t say it.

Another pitfall is the ‘inner circle’ syndrome. This is a tendency to potentially defame a third party when interacting with a limited circle of friends on Face book or followers on Twitter.

Remember, it is a mistake to believe that the web or social media is truly anonymous, as a trace of an individual’s IP address can easily address this.

A popular social media marketing tactic is to run competitions, however many have failed because of incoherent rules or ambiguous requirements for participants.

If your business is running a competition and I urge you to consider this, then it’s wise to make the rules clear, and concise.

The greatest impact for any competition is to be shared as widely as possible. Greater clarity and simple instructions cut down complaints and can ensure a greater percentage of the participants will share your competition with their on line community or social media timeline.

When it comes to social media and the law it’s best to remember two things. Firstly use common sense and secondly, know the rules.

Then it becomes a lot easier to enjoy social media personally and to maximize the impact it can undoubtedly have for your business.