Success is all about Ideas 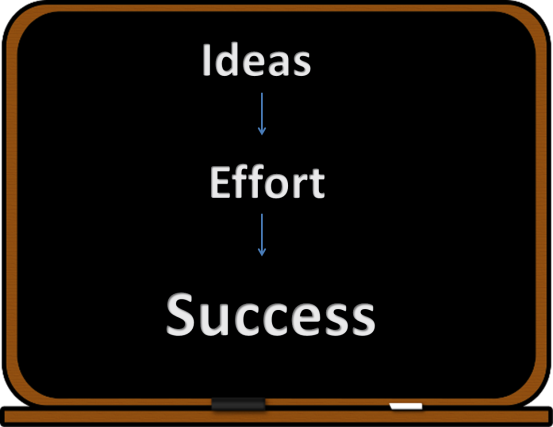 I was asked recently what is it you do? My answer was short and to the point, I replied ‘I help people make their ideas become a reality’.

I wasn’t trying to be trite or massage my own ego, it’s something I passionately believe in, that the biggest barrier to success is unfulfilled ideas. I am intrigued by why do so many of us fail to develop the ideas we have?

We let great ideas wither in the ether, or worse give up when the going gets tough.

Thomas Edison put’s this best for me when he says:

"Nearly every man who develops an idea works it up to the point where it looks impossible, and then he gets discouraged. That's not the place to become discouraged'.

I’d like to share this week some advice I gave a firm who were becoming discouraged, on how to take their business forward and action the ideas they have.

I began by telling the story of Stephen King and his first novel ‘Carrie’.

The one thing many successful people have done in the past is failed. However, what makes them successful is the ability to persevere and believe in the ideas that they have and adapt them. They learn from failure and harness this to achieve their dreams.

As a struggling author King was delighted to receive an advance of $2,500 for his first novel, but after 30 rejections of his drafts, he decided enough was enough and gave up on the book.

His wife believed in him and urged him to identify what was holding his story back and fix it. He did this and then resubmitted it a 31st time for publication.

He had the courage to believe in his ideas and the rest is as they say history. Stephen King is one of the bestselling authors of all time and his ideas have influenced a generation of writers and filmmakers. Carrie has also sold over 350 million copies.

Failure is part of life and just because an idea fails once does not mean it is a bad idea. The secret is to identify where you have gone wrong and then change direction and try, try and try again.

Far too many of us have great ideas in our head but these will always remain as wishful thinking if we fail to take the next step and start to write them down.

When written down, they cease to be dreams and start to be plans around which you can form goals and objectives to make them happen.

It’s a good life goal and business practice to continually review the ideas you have had in the past, as just because they failed once does not mean if you analyse what went wrong that they can’t be resurrected.

I’d urge you all to think about the ideas that you have parked or forgotten about and ask yourself these 3 questions:

Once you have done this, the ideas begin to leap out of your mind and on to paper, and an action plan starts to form.

"Ideas are like rabbits. You get a couple and learn how to handle them, and pretty soon you have a dozen.'

The secret is to have a process to make your ideas happen and I’d suggest the following.

Have a regular session set aside each month where you can as a business sit down to discuss the ideas you have to improve what you do. Remember to involve all areas of the business.

A good framework to use is to answer these 4 questions

Try it, write down your ideas and plan how you can make them happen and I am convinced your life and business will improve. Please remember, just because you fail once does not make you a failure.

Learn from it and success will come.

I’ll leave you with a quote from Napoleon Hill

'All achievements, all earned riches, have their beginning in an idea.'